Secure in a airtight gondola suspended by balloon above the caustic troposphere, The Venusian Congress has come together to bring you the newest excursion in the Satellite Series. Though one might say their heads are in the clouds, their feet are securely on the ground deck plates, ensuring a choice combination of hard science and squishy fun. They are...

Michael has been going to conventions since Christine took him to an Albacon in the early 1980s. Since then he has caught the bug. He dipped his toe in the waters of con-running with Satellite 1, managed to get up to his neck chairing Satellites 2, 3 and 5 and went full immersion with our Eastercon, Satellite 4. And still he comes back for more. Previous to all this his main contribution to cons has been running a series of 'Deface the Music' quizzes at Redemptions, Eastercons and even a Worldcon.

In the real world he runs the Radiochemistry Group in Public Health England and when not working or SMOFing spends the rest of his time cleaning up after cats. 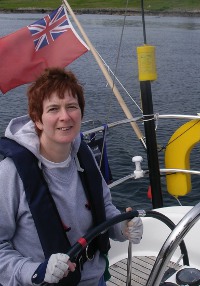 Christine started attending cons in the early 1980's but only became involved in con-running in 2007, when it finally dawned on her that experience gained helping to organise scientific conferences might be transferable. She ran programme for Satellite 1 through 5, and also looked after guest liaison up to 4, as a result of which she is now an official minion of Fluff (the plush Cthulhu).

Her real-life job is as an academic, specialising in environmental and analytical chemistry. She plays percussion in the platinum award winning Strathclyde University Concert Band, and enjoys hill-walking and sailing in the West of Scotland. 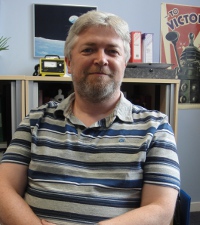 Mark's first convention was Albacon II, he enjoyed it so much he volunteered at his next convention — Invention later the same year — and helped run the at-con registration desk. After helping again at Albacon 84 he was invited onto the committee of Albacon 85. He has been on the committee of 4 Eastercons, most recently our very own Satellite 4. For both Intersection and Interaction (the 2 Worldcons held in Glasgow) he was responsible for liaison with the SECC & the Moat House hotel (now the Crowne Plaza). He was also Deputy Division Head for Logistics for Loncon 3.

Mark's enormous contribution to fandom was recognised in 2014 when he was voted recipient of the Doc Weir Award.

In real life Mark works as a sysadmin at the University of Glasgow while trying to amass enough books to enter L-space.

Mad Elf has been congoing since 1988. In that time he has discovered the delights of being a Gopher, Green Room Bod, Tech, and Steward, and has finally settled on Operations as the place to be. He has also been on several con committees, from the tiny Isocon 4 to Albacons and Eastercons, and only one of the resulting conventions has been classified as Better Off Not Mentioned.

Outside of conventions, he enjoys watching anime, playing table-top RPGs, computer games, and reading dodgy fan-fiction — and also working on his own RPG, and writing the occasional computer game and dodgy fan-fiction. He is also discovering the wonders of raising a teenage daughter. All of this is funded by a job contracting as a web applications programmer.

Morag’s first convention was a day event featuring Babylon 5 and including Guest of Honour, Michael O’Hare, in Glasgow way back when. After that, her next trip into the heady realms of sci-fi cons was Satellite 1, followed by Satellite 2 and Satellite 3. She bravely decided to try out a different convention, went to Novacon 42 with Christine and Michael and was prevailed upon to become Scribe to the Satellite 4 Committee, a position she filled with great expertise. From there it was a natural step to join the committee of Satellite 5... and once in, it's difficult to get out.

In her other life, Morag works as a free-lance scientific/medical indexer and editor, producing work for such exciting journals as “The World Journal of Gastroenterology” and probably knows more than anyone ever might need to on weird and wonderful biomedical topics.

The Venusian Congress couldn't bring you this convention without the help of their minions team of volunteers. They are...

Tig’s first ever con was Worldcon 2005 which she attended for free! During Intervention she earned enough groats to pay membership to Eastercon 2006.

The first con that Tig paid to attend was Satellite 1 and she has attended every Satellite convention since.

Tig has provided programme items at Satellite 3, 4 and 5 and for Satellite 6 she has taken on the role of staff member.

Outside of conventions Tig is a self confessed Potterhead and Disnerd and recently started running, including a 5K at Disneyland Paris.

In real life Tig is a Planetarium presenter at Glasgow Science Centre and has received positive feedback on her shows from John Brown, the Astronomer Royal for Scotland.