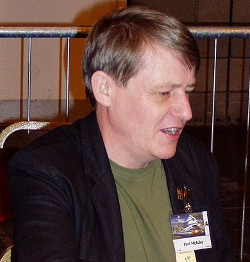 Paul McAuley started writing at the age of 15, when he borrowed a typerwriter and produced half a science fiction novel set on Mars. After writing 2 unpublishable novels, he then turned to a life of academia. He graduated with a BSc in Botany and Zoology from Bristol University, completed a PhD on plant animal symbiosis, worked as a researcher at Oxford and at UCLA and then becaume a lecturer at the University of St Andrews. During this time, he published 6.novels, including "Fairyland", which won the Arthur C. Clarke and John W. Campbell Awards. In 1996 and "Four Hundred Billion Stars", which won the Philip K Dick Award in 1988, Paul decided to become a full-time writer when he realized it was getting harder to find time to write and think about writing while also working on the "day job".

Paul's work is described as 'hard science fiction' and he says himself that his scientific background has influenced and informed his writing. He has a curiosity about how the world works and the way technology has changed it in the past, is changing it now and may change it in the future. He has now written more than 20 books, including science fiction, thrillers and crime novels, a Doctor Who novella, and has also written over 80 short stories. Recently he completed a BFI Classic Guide on Terry Gilliam's "Brazil". His 21st novel "Into Everywhere" was published in 2016.

Paul describes himself as a huge science junky who spends too much time tweeting about weird and wonderful stuff and was listed in "Time" magazine's 140 most interesting tweeters in 2013. He lives in North London with his partner and is occasionally haunted by a cat.